The two huge horns on his head, the body that looks like it’s covered in heavy armor, and the appearance of holding a lancer-like weapon reminds me of a “dark knight” and terrifies anyone who sees it. The Vajra’s most terrifying attack function is the large destructive weapon on its back. It instantly transforms into a wing-shaped flying unit, a huge claw-type attack device, a bow-shaped cutting attack device, etc., and attacks.

The powerful final form mode, which is composed of huge wings / destructive weapons and limb unit parts, realizes a volume that surpasses the first series, Waruder Legion Ripper. The maximum height in the final form is about 21 cm, and the maximum width is about 38 cm. The total height can be changed by connecting patterns of units such as hands and feet, and it is possible to create various enemy mecha that correspond to various Diaclone machine sizes. 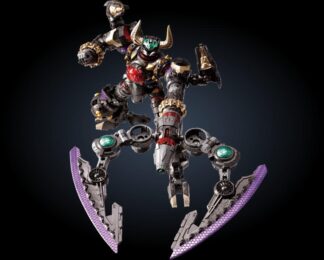